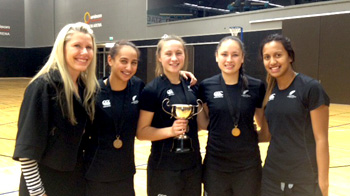 “It seems like Wellington has adopted both of you as their own,” observed Haier Pulse goal shoot Caitlin Thwaites to her coach Robyn Broughton and Hurricanes coach Mark Hammett, during a Haier Pulse Sponsors’ Breakfast earlier this week. “I certainly feel that Wellington has adopted me. I don’t necessarily feel like a foreigner anymore and I think I’m losing the Victorian accent.” she explained.

The new Netball Central Zone will be officially launched with the unveiling of the inaugural U23 team and the new zone logo at a Grand Launch event on Sunday 19 May at the Hotel Coachman in Palmerston North.

Netball Central, which covers the majority of the lower North Island, stretches from Hawke’s Bay in the east, Taranaki in the west, Wellington in the south and has Manawatu at its centre. Netball Central is one of five new zones recently created by Netball New Zealand as part of a new structure for the game in this country, designed to align the grassroots game with the five professional netball franchises.

Take a look at the players from Nebtall Central who have made through to National squads.

This website is being set up to help connect, communicate and facilitate the development and delivery of netball in in the Central region. A website is always a work in progress. If you have any suggestions about this or any other aspect of our service, please let us know!

Well done to the Tu Toa girls after their convincing win over St Marys Girls this week. They move through to the Semi Finals against Baradene College on 10th June.

Congratulations to Angela Armstrong-Lush who has been appointed umpiring duties at the upcoming Pacific Netball Series to be held in Samoa at the start of June.

Maori Sports Coach of the Year 2012

Congratualtions to Waimarama Taumaunu who won the Te Maru o Tumatauenga - Maori Sports Coach of the Year for 2012.